Top 10 Logo Design trends for designers to follow in 2021

“Looking for a logo to establish your brand’s identity? How about going through some of the hottest website design trends in 2021.”

Last year (18 months to be precise) has been a wild ride! The pandemic has enforced a plethora of changes in every walk of life. Remote working has cornered the market during the post-pandemic era.

Startups have taken center stage around the globe. And this translates to one thing:

We need logos! Lots of logos!

While professional logo designing has been a constant in the last couple of decades, people have jumped on the bandwagon in the last few months. Different logo designing trends have been becoming increasingly popular among customers.

Time to cut to the chase and take a quick look at the 10 logo design trends that have become the talk of the town.

One of the fascinating aspects of human nature is the attraction of our eyes towards motion. You are instantly attracted towards them by moving oceans, blazing flames, or even a plane soaring above our heads. (Too bad if you’re driving while doing so!)

No doubt, this part of human psychology is influencing business decisions today. While the evolution of the logo has been in full swing in the last decade or so, it only gained momentum in recent times. From websites to mobile applications, animations have been ahead of the pack. This trend has somewhat influenced the corporate logo designing industry too.

Although Static Motion logos have proven to be far more popular, animated logos still bring that sense of uniqueness with them. No matter how good a static motion logo looks, an animated logo will have a distinctive sheen around them, as you could witness with these logos. 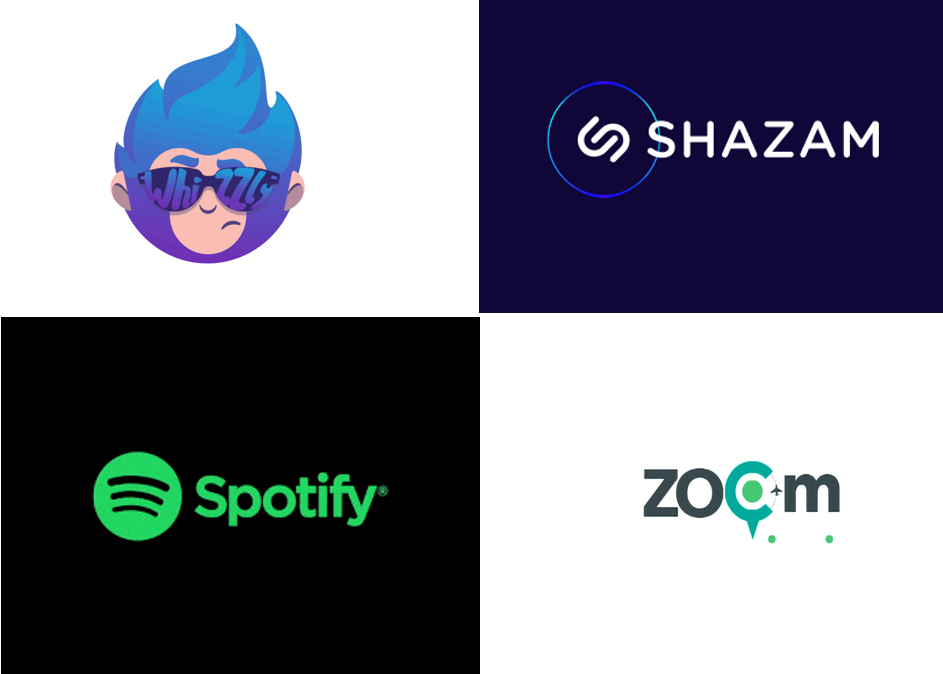 Although their inception dates back to the 90s, Gradient logos remained one of the most popular and engaging logo designing techniques. But it too had to step aside when new trends emerged, particularly playing second fiddle to flat designs.

In 2018, the tides of time changed, and gradient logos became relevant yet again. Thanks to their eye-catching appearances, even organizations having established their logos globally rebranded with gradient themes.

The colorful nature of gradient logos works like a magnet in attracting eyeballs to them. The way they help in transitions is a sight to behold. One of their most attractive traits is the versatility they bring with them. From UIs to book covers, from cosmetic accessories to prime materials, gradient colors have emerged as frontrunners in designing yet again.

These logos depict why gradient colors can blow your imagination away in a single peek! 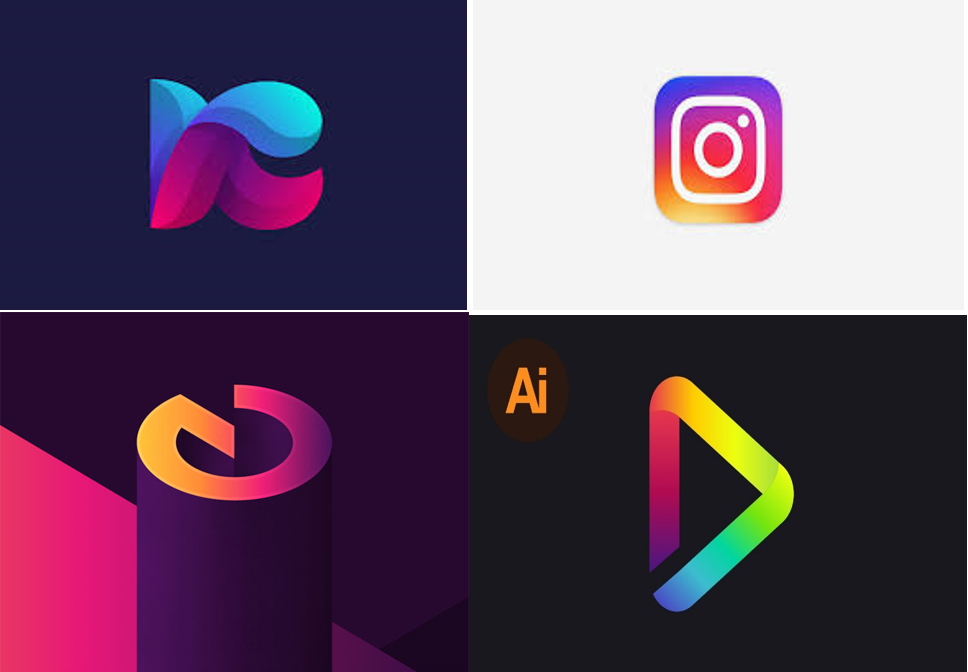 While it’s a no-brainer not to consider the influence of geometry behind all sorts of designing, considering how all the fundamental shapes in the universe are based upon some geometrical positions, Geometry-centric logos serve as a primary learning tool for anyone new to the industry.

Circles, triangles, stars, rectangles! Name any fundamental shape, and you will find it influencing logo designing as a whole. Some of the most iconic brands may have rebranded their respective logos keeping the need of time ahead of them. The fact that their original logo designs were based on geometrical logos can never be understated. 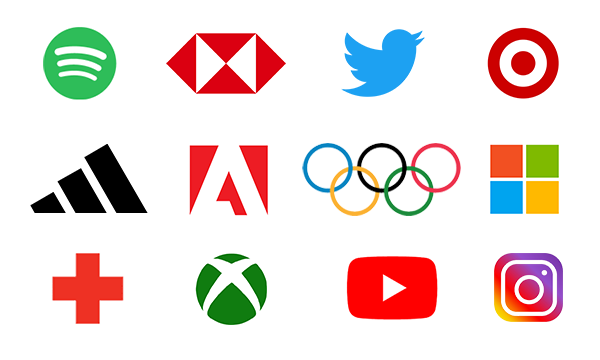 I think I don’t need to make a long, in-depth introduction for this one! The name gives away the basic idea behind this form of logos.

The minimal effort needed, the luxury and sophisticated nature they harbor, their distinctive authority, and their classical nature alongside the practical implications make them stand out even after being outdated by many newer and cheesy-looking trends.

The grace these black and white logos carry is unmatched. 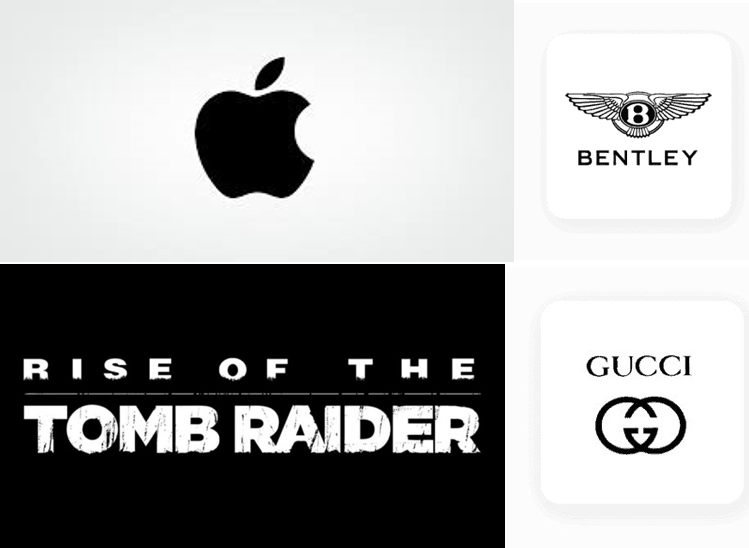 Although the Black and White logos class is hard to beat, Colored logos have raised the bar for business logo designing. The way Human psychology works when in contact with colors prompted the industry to take up the color medium in enhancing logo designing trends.

I mean, how can you unsee colors that tend to attract eyeballs anyways?!

Vivid colors allow the designer to test the boundaries of one’s imagination by bringing a variety of colors into the mix. Although initially despised by the consumers, colored logos slowly but steadily made their mark in the market.

Testing the human imagination, impressive designs coupled with an exquisite combination of colors make for a very interesting combination. If you are willing to go the extra mile while designing logos, you might want to master the aspect of using colors on their merit. These logos will definitely erase any doubts you have about Vivid Color logos.

Glitch art has been on the rise for quite some time now. The aesthetic nature it brings is a sight to behold. Although the method used behind this form of art involves corrupting digital data and manipulating electronic devices, the result possesses an aura of its own.

Glitch art might sound like a modern-day shenanigan. Still, in reality, its origin dates back to the beginning of the 20th Century, seen distinctively in Cubist paintings or even in rugs originating from Iran and Afghanistan. Fast forward to the modern-day era; it has become one of the most fundamental aspects of pop culture.

There are various techniques used in Glitch art designing, Pixelation, Light Leaks, Double exposure, Noise and Grain, Color Degradation, Textures, and Glitch Lettering being the most commonly used techniques. If you’re wondering how something such dysfunctional looks so aesthetically pleasing, have a look at these logos. (Unless you’re wearing glasses, though!)

A type of logo designing trend you’ll probably find in many restaurants and food-processing companies, characters, or mascots in logos provides a family-friendly nature for such brands so that they could avoid not flying with a younger audience.

The concept of using characters/mascots in logos is not restricted to food processing companies or restaurant chains; companies having complex ideologies behind them would think outside the box and would want to try this trend in order to make it easy for their clientele to comprehend what they are in for fully.

I mean, who can say that Mailchimp deals with the complex task of market automation after looking at their logo?! (I always thought of it as a theme park!)

Well, if you think that these sorts of logo designs are usually meant to attract a younger audience, specifically children, you’re not wrong. Have a look at these logos. 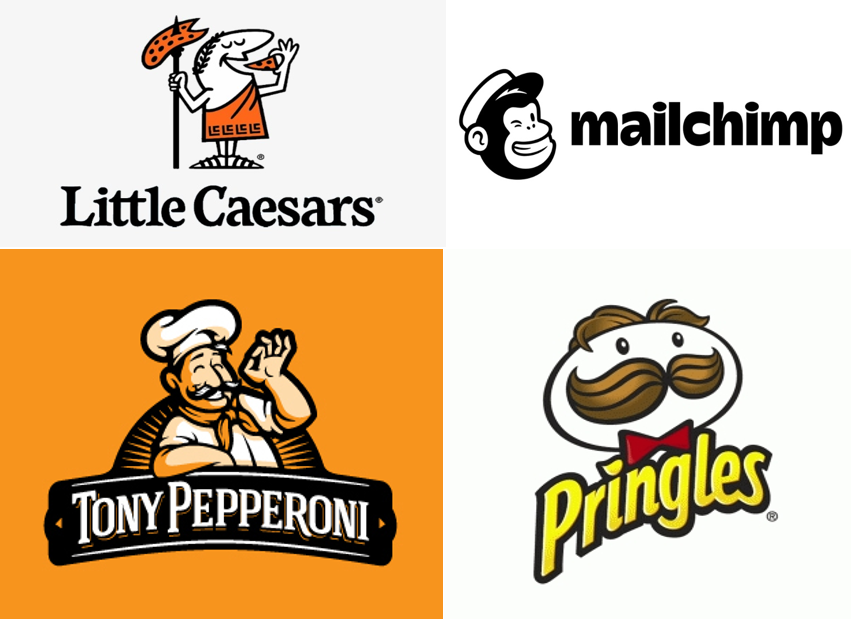 The beauty of mother nature is on full display around us the whole time. The aesthetically appealing visuals are enough to mesmerize anyone. No doubt, the logo designing industry seeks inspiration from nature while coming up with new designs.

With the sense of calmness and harmony, these visuals bring to the table, companies more than often look to base their logos around it. This medium is often used to communicate even the most complex of ideas to laymen like me.

Over the recent years, environmental issues have taken center stage due to rapidly occurring climate changes. Companies, who are often accused of being culprits of nature, rebrand their existing logos to look more eco-friendly and remove any negative assumptions about them.

Talk about finding an easy way out from controversies!

These logos depict why Nature-based logo designing has become trendy over the last few years.

A technique that involves using just the name of the brand in logos, Wood mark logos are one of the most basic types of logos, yet they appear to be the most attractive at times.

Many tech giants rely on this basic yet effective trend of logo designing. Wood mark involves manipulating the font in a way that it may appear basic they would attract anyone in contact with them.

Are you achieving maximum results with the least amount of effort? What else can one demand! Wood mark is just the answer to this question.

It makes life easier, isn’t it?!

While at times, Wood mark might feel too basic to implement, they had this immense appeal that would surely help you boost your business. Still having second thoughts?! Check out these logos. 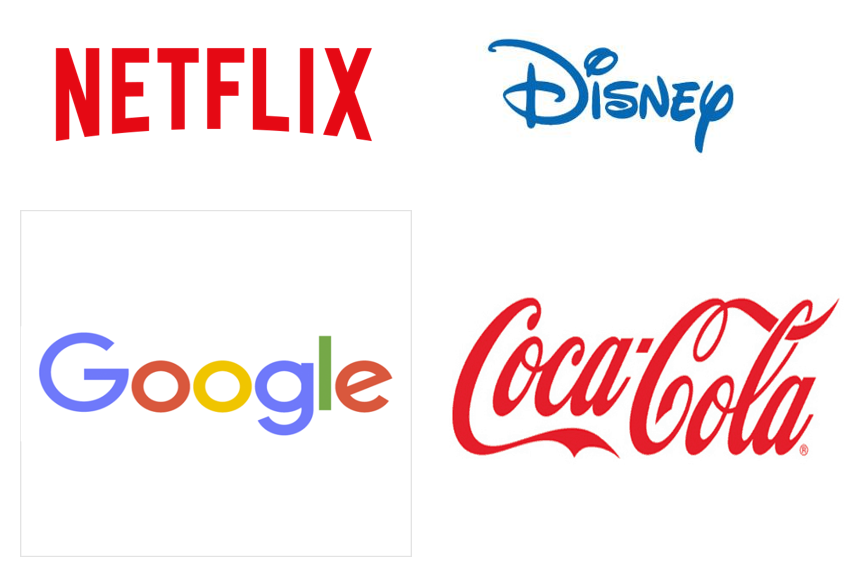 A relatively new trend that uses Ink-styles drawings for logo designing, Ink style logos have become quite popular in recent times thanks to the rise of logo designing.

These logos bring a sense of being old-school on the table, which at times could be used to trigger nostalgic feelings among the viewers. The incredible and fine details that these logos carry with them will surely blow anyone’s imagination away.

From monograms representing football clubs, National level sports bodies to using merely a signature at its behest, Ink-styled logos will surely attract your attention when you look at them. And trust me when I say this, its really hard to look away from them.

Some of these logos will surely make you believe in my words.

How to make one?

While there are various tools that you can use, none is more famous and basic than Adobe Illustrator. The pixel grid assists you in keeping objects aligned; then, there are other tools like brushes that make designing easier than you might expect.

Then you have Logaster. An easy-to-use, input-based logo designing tool, its built-in feature assists you with coming up with a relevant logo after you have entered your company/brand’s name.

Wix, Looka, and Logomaker are other front-running logo designing software you might want to try.

Logos designing has always been a relevant industry. But the recent few years have only helped it increase its demand among other businesses. People have been attracted to taking it up as their profession alongside creating an interest in it.

The demand for logos has been at an all-time high, thanks to the rise of startups around the globe. From remotely relevant startups to the emerging player in any industry, everyone wants logos. It only translates into business opportunities for those looking to acquire it as a medium of financial gain.

While we live in a time where uncertainty reigns supreme, one thing is for sure; Logo designing services are the “Next big thing” when it comes to emerging business trends.

“Avail discounts on logo design services from Extatic Design. Select the package that suits your demand the most!”

NFTs: Everything You Need About NFTs in 2022